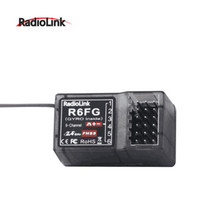 How to Match Code With Transmitter:

1. Put the transmitter and the receiver close to each other within 50 centimeters.

2. Turn on the transmitter, then power on the R6FG.

3. There is a black button on the R6FG, press the binding button twice in two seconds and release, receiver light start blinking, after about blinking 8 times, match code success then receiver signal LED always on!

Gyro Function Working Mode --  Both green and red LED on.

Receiver with gyro integrated to hold the vehicle in a straight line during aggressive acceleration and braking or get bumped around by rough terrain.

Receiver with gyro integrated to keep the uni-direction and anti-slip.

How to Turn On Gyro Function :

Quick press the ID SET switch two times within 1 second, the LED change from green to red means gyro function has turn on.

Integrated Gyro, is used to assure the stability of cars on turning status; and keep on straight running even the cars get some mechanical phantom. Gyro function can be enabled or disabled. PARAMETER INSTRUCTION

Gyro preset disabled, and it enters post indication status. There are two indicators on the receiver. The green one shows the receiver status and the red one is for gyro. When the led turns on, the gyro is enabled , and the led turns off, gyro disabled.

Cars can be drove forward and backward, gyro is enabled forward or backward correspondingly. Like the EP cars, different connection will make different direction, the gyro is ensured to be enable forward.

Same like a plane has reverse, car kit gyro has reverse as well. Only right set reverse gyro can act to correct.

When the gyro is enabled, pull the throttle trigger and then release (make sure the car stops running), turn the car right or left without changing steering wheel, if the servo will not follow with, it shows gyro is set backward. Press the binding switch one time less than 1 second, the LED flashes red once, gyro is changed to act forward.

1.The antenna must be kept as straight as possible. Otherwise it will reduce the effective range.

2.Large model aircraft may of some metal part interfering signal; in this case the antennas should be placed at both sides of the model. Then the best RF signal condition is obtained at any attitude.

3.The antennas must be kept away from conductive materials, such as metal and carbon by at least a half inch. The coaxial part of the antennas does not need to follow these guidelines, but do not bend it in a small radius.

4.Keep the antennas away from the motor, ESC, and other noise sources as much as possible.

6.After all of the above steps finished, the LED indicator will turn and keep in red/green.

7.The receiver can be packed by sponge or foam for shocking proof when it is installed to the model.

After all of the above steps finished, turn off the transmitter and then power it on, now the program functions to assure it under control of transmitter with a right connection.